Project Gutenberg is a new version of WordPress’ editor that introduces a more modern interface to write and edit rich content.

It is designed to replace the single text area UI featured in the core – a familiar sight to millions of users.

With Gutenberg, you can add and edit blocks of content in a similar way to page builders such as Avada Fusion Builder and the omnipresent WP Bakery’s Visual Composer. These include headings, paragraphs, images, and embeds. It also has the ability to drag them above and below each other, which is a default option with most page builders.

The writing experience is closer to Medium’s UI where it feels like you are writing directly on the page canvas as opposed to a text box, with fonts that appear different from the one that your browser picks up. 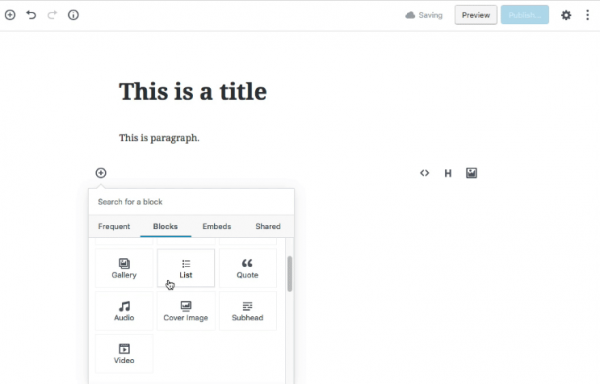 Why are WordPress upgrading their editor?

This is part of the master plan to democratise the Internet, of course.

It should be noted that competitors such as Wix, Medium, and Weebly are also developing interfaces that look great and are a joy to use. But compare those upgrades to WordPress’ current editor, and you’ll agree that they need to up their game or risk losing users – those that just want to get started quickly and publish simple websites. These represent customers who are at the beginning of their online publishing journeys.

Last August, Matt Mullenweg articulated the technical / usability thinking behind Gutenberg in a post – We Called it Gutenberg for a Reason. It listed the benefits that this new development can bring to the wider community: devs, agencies, theme developers, users and web hosts like ourselves too.

Here are a couple of his points:

Developers and agencies will be able to create interactive templates that clients can easily update without breaking things or dealing with custom post types: Imagine a custom “employee” block that you can add to an About page that includes a picture, name, and bio. They’ll be able to replace most meta boxes, and they’ll get a chance to update old code or clients to work in this new paradigm.

Users will finally be able to build the sites they see in their imaginations. They’ll be able to do things on mobile they’ve never been able to before. They’ll never have to see a shortcode again. Text pasted from Word will get cleaned up and converted to blocks automatically and instantly. (I pasted the first version of this post from Google Docs and it worked great.) They’ll start manipulating their sites in ways that would have taken a developer. They’ll be able to move from blogging to using WordPress as a CMS without missing a beat. Editing posts will just work; they’ll write more. They’ll learn blocks once, and then be able to instantly use and understand 90%+ of plugins. Not everyone is keen.

The new WP editor will make installing a page builder a redundant exercise for many. This means that page builder developers will have to make sure that their roadmap will always be several steps ahead of Gutenberg in terms of features and value-add.

Meanwhile, other developers point out that adding sophistication to the core contradicts the notion that WordPress is more of a framework than a CMS. They forget, however, how the platform came about and what purpose it served.

Overall, feedback from the community is negative with the plugin being rated 2.6 / 5 at the time of writing.

Don’t read too much in this measure, though, as the plugin is still in beta and most of the comments are from the developers.

We’ll wait until the plugin is closer to a release date to test it thoroughly before giving it a score.

In principle, we think WordPress is on the right track:

A caveat, though. We would like it to remain a plugin or a function that can be turned on and off, as one of the plugin authors suggested in his reply to a concerned user:

There will be ways you can turn off features, blocks and even Gutenberg itself. It’s also worth noting you can unhook the Gutenberg styles also.

When is Gutenberg going to be shipped?

Gutenberg will ship with WordPress 5.0, but the release will come out when Gutenberg is ready, not vice versa.

Give it a spin

After you do so, kindly share your thoughts in the comments section below.

Please note that Gutenberg is still in beta so don’t test in on your live website.

Download Gutenberg or install it from within WordPress. For your WP Hosting needs, just give us a nudge.