KanbanWP for Agile WordPress Development (And Much More)

This February, WP Hosting is focusing on ‘agile’ methodologies for software development and business use to help pros work in a smarter, quicker way – through a process of continuous planning and feedback.

In line with our theme of the month, we approached Corey Maass, the creator of KanbanWP, to acquaint us with his ‘agile’ plugin.

My name is Corey Maass. Like most small business owners, I always had an entrepreneurial streak. I taught myself how to make websites in college in the 90’s to promote myself as a musician. The music didn’t pan out, but building websites turned into a pretty good career.

Around 2003, I heard about 37Signals building a business from a website and I was hooked. I’ve built and launched dozens of web apps since. A few have caught on in small ways. Most never saw a single customer. I continued to look for opportunities, build out ideas and learn about this evolving thing called SaaS.

Meanwhile, I continued to pay my bills building websites. It got a lot easier when content management systems came along, saving me hours of setting up complicated ways for clients to make updates. I followed a few different CMS’s, finally landing on WordPress when I saw it could do more than host simple blogs. I’d become a pretty good programmer building out my SaaS ideas and slowly I learned to bend WordPress to my will. 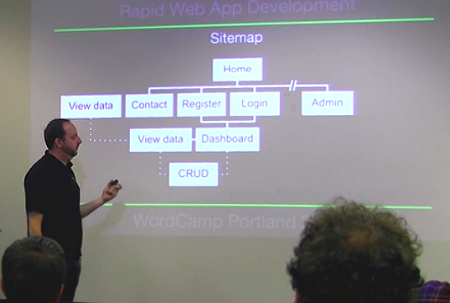 It was in 2015 that I realized I’d been working almost exclusively with WordPress for about five years, but I’d never combined it with my love for the product. I was also still unaware of the vast WordPress community behind the scenes. That year, I attended my first Wordcamp in Atlanta, and my eyes were opened wide. Here was a regional conference about some pretty niche software, and more than 500 people showed up!

I had some great conversations. The most fruitful were with developers who’d built full products onWordPress, either plugins for it or using it as a SaaS platform. I was intrigued. How had it never occurred to me to build my software ideas on WordPress?!

That year I built a few SaaS apps on WordPress. It’s great for some ideas, terrible for others. I’ve spoken on the topic. You can watch it here.

That fall, I was leading a development team for a startup and we needed some simple project management. By then I was in the habit of looking for WordPress plugins when I needed software. I was surprised to find there was no Kanban solution for WordPress. I knew I’d found my next product.

If you’re not familiar with Kanban, you might be familiar with Trello. Trello is an online Kanban board. If you haven’t seen Trello, the principle is simple.

We’ve all used a to-do list, one column of things you need to do or things you’ve done. The problem is there’s no indication of what you’re doing right now, and doing something might require multiple steps. A Kanban board solves this problem with multiple columns representing as many steps as you might need. Picture a whiteboard in your office with three columns – to do, doing, and done. If you move an item from to do to doing, now anyone knows what you’re working on.

Getting back to my love of building software products, here’s how I might set up a simple Kanban board to build a new WordPress plugin.

Now, the plugin is in the plugin directory. People start using it and request new features. They also find bugs. So I might add two new columns on the left of my board – “Requested features” and “Bugs”. Everything is captured on the Kanban board (even the bad ideas), and whenever I want to work on the plugin, I know where I left off. It’s a simple pattern, but it can grow with you.

It took me a few months to get the first version of my Kanban for WordPress plugin out the door. It was well-received and, like my example above, has a long list of feature requests from users. Over the last couple of years, I’ve expanded it to include features for project management, sales tracking, managing job applicants, editing and publishing large blogs, and more. It’s been fascinating to see the creative ways people use a Kanban board.

In 2016, I released some paid add-ons for Kanban. Over the next year, most customers bought all of the add-ons together, so in 2017, I combined them into a single paid add-on called Kanban Pro. It includes extra features like customizable fields, commenting and notifications. This year, we’re releasing a version 3 that will be faster and more feature-rich, making Kanban for WordPress even more customizable for however people want to use it.

Building a software product and running a business within the WordPress ecosystem has been a great experience. I knew from Wordcamp Atlanta in 2015 that the WordPress community was something special. Since Atlanta, I’ve attended a dozen Wordcamps all over the US. People are friendly, diverse and welcoming. WordPress is built by nerds but more often used by non-nerds, so the conversation extends well beyond the tech, and the underlying theme is helping people succeed with whatever they’re trying to accomplish. I love this mission.

In 2018, I’ll be attending another six Wordcamps, venturing into Canada. I haven’t had a chance to travel to Australia, but I know they throw great camps, and you should attend!